WPMRC explores ways to help the military community through collaboration 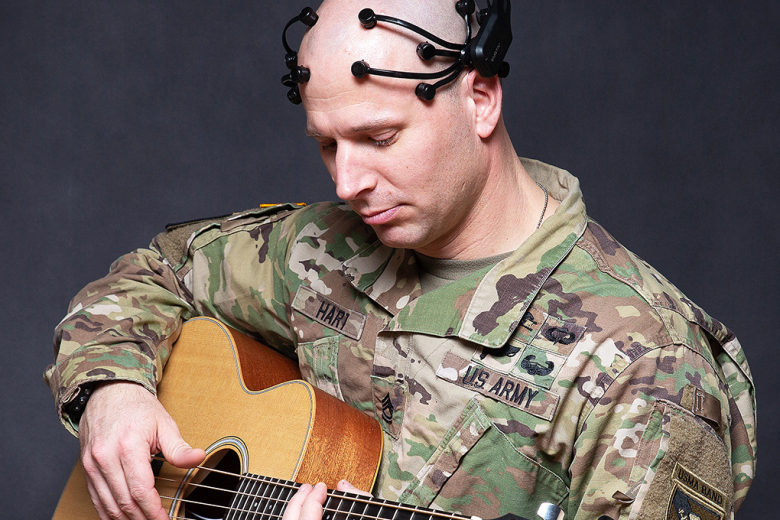 Music is an art form and creative outlet. Artists write and play songs, and audiences listen with varying responses — joy, sadness, excitement — depending on the lyrics and/or tone of the piece.

While none of this is surprising, what some might find interesting is that there is a scientific side to this exchange. Audience response to music in general is what led to the idea of the West Point Music Research Center (WPMRC), developed in 2018 with the mission of supporting cadet and faculty development through the study of the auditory domain and conducting research on behalf of the U.S. Military Academy, the Army and the Department of Defense.

Chief Warrant Officer 3 Thomas (T.J.) Jackson, associate bandmaster for the West Point Band and WPMRC researcher, explained the seeds for the Music Research Center were sown with a Government Accountability Office (GAO) inquiry into the effectiveness of Army bands.

“That led to the idea of the effectiveness of music on audiences,” Sgt. Maj. Denver Dill, West Point Band member and WPMRC researcher, said.

“Not just military music, but all music,” Jackson emphasized.

The WPMRC has partnered with U.S. Military Academy academic departments such as Mathematical Sciences, where they conducted research, with the Nielsen Corporation, using mathematical game theory to frame and analyze public perceptions of Army band performances.

“Frontiers in Psychologyˮ published the study, the first for the WPMRC in a peer reviewed journal.

Partnerships have been the engine keeping the center running, according to Chief Warrant Officer 3 Jonathan Crane, previous WPMRC researcher and associate bandmaster.

“Our real forte was that collaborative aspect. And music just lends itself naturally to that,” Crane said.

Collaboration between WPMRC and the Center for the Study of Civil-Military Operations made it possible for a Class of 2024 cadet to research current Psychological Operations (PSYOPS) and Civil Affairs training and best practices on an Academic Individual Advanced Development (AIAD) experience with the 95th Civil Affairs Brigade/PSYOP at Fort Bragg, North Carolina.

The Department of Social Sciences is closely connected to WPMRC, as Dill is teaching the second iteration of the “Music and Influence” seminar under SS493, Senior Studies in American Politics, in the spring of 2023. The course covers how music intersects with culture and politics.

The WPMRC has also worked with the Photonics Research Center, using its laser imagery technology to see and measure CO2 and aerosols from someone playing a wind instrument or singing, in response to concerns about air flow during the COVID-19 pandemic.

Crane learned how he could use his musical skills to help his fellow Soldiers, and, ultimately, to make military music his career, while deployed to Iraq in 2011.

There, he discovered playing music as an escape, however temporary, from the stressors of combat. He notes that the hallmark condition of war is Post Traumatic Stress, and that music can help Soldiers and veterans suffering from trauma.

Playing music helps their brains to refocus from traumatic thoughts to the physical movements required to play the guitar or any other instrument, as well as to be aware of what other musicians around them are doing.

Additionally, music can help Soldiers who have suffered multiple physical and mental traumas, such as Capt. Luis Avila, with whom Crane has corresponded on Zoom. Avila, despite severe injuries from an improvised explosive device in Afghanistan, regained his ability to both speak and sing, with the help of his wife and a music therapist.

Crane is working to try to make music therapy standardized across the DOD and the Department of Veterans Affairs.

Crane said that a particular musical skill, called speech-in-noise, became useful while he was serving as a Humvee driver in Iraq. Over a headset crackling with static, amid other intrusive noises, he needed to be able to distinguish both the direct instructions of his truck commander and the gunner’s reports. He said that such a skill can be lifesaving.

Soldiers could learn these skills before they deploy, Crane said, starting with the recruiting process, through inquiries about musical abilities and backgrounds. He said that such experience as playing in the school band or taking music lessons as a child might help with such jobs as deciphering radio codes over static.

This approach would be in line with the Army Futures Command initiative to enhance human performance by finding ways for Soldiers to see better and hear better, among other biological improvements.

The WPMRC currently has a Cooperative Research and Development Agreement (CRADA) with the University of Delaware to explore music’s impact on performance optimization, and how its influence can enhance quality of life.

Further research with the West Point Center for Enhanced Performance is studying how musical performance can be leveraged to help cope with anxiety, Post Traumatic Stress and Trauma, among other projects.

The CRADA will give cadets and faculty access to graduate-level and post-doctoral researchers across various fields of study and provide opportunities for both capstone research and AIAD experiences.