Planting for the future at Constitution Island 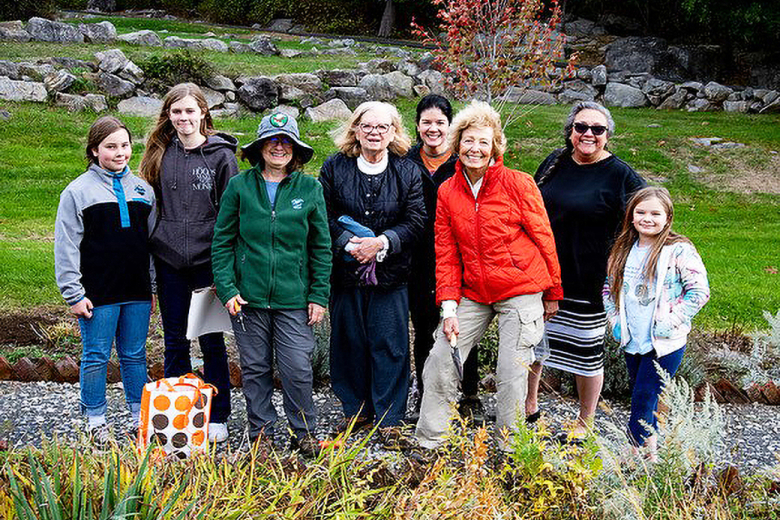 With the help of a generous grant from the Daughters of the United States Army, West Point chapter, and a dedicated group of volunteers, the gardens at Constitution Island remained in full bloom this season. It was as though Anna Warner, herself, brought to life the words from the preface of her book, “Gardening By Myselfˮ published in 1872:

“I wish everybody had a garden, and would work in it himself — the world would grow sweeter-tempered at once.”

As the season progressed, returning gardeners were joined by new volunteers and local home-schoolers. The West Point ferry faithfully took gardeners to both South Dock and Garrison from April through October on Wednesday afternoons.

The weekly group averaged between 8-12 people who volunteered 650 hours to keep the gardens thriving.

One of the great successes this year is what is referred to as the ‘back door’ or kitchen Herb Garden. An education showpiece that represents traditional homestead herbs, but was allowed to go dormant through the Warner House restoration, was completely restored and replanted.

Some herbs were grown from seed, a few others were bought with a small donation from Adam’s Fairacre Farm, and others came from our volunteer’s own gardens.

Dozens of new perennials were added to the Walkway Garden, in keeping with Anna Warner’s month-by-month gardening book.

Some of the standouts were a reblooming Lilac, a gorgeous ‘Mandarin’ honeysuckle and garden obelisk to support it. A few traditional heirloom plants like Bleeding Heart and Montauk Daisy came from local gardens and others from seed. Improvements were also made to the watering system.

The two ‘Autumn Glory’ maples that were planted last October by a previous DUSA grant established themselves nicely and gave beautiful fall color — despite a very dry summer.

The gardeners spent their final day of the season recently planting spring bulbs to welcome the public back to the Island in 2023.

For anyone interested in supporting the Constitution Island Association, join us for a holiday Champagne Brunch and annual members meeting at the Thayer Hotel from 11:30 a.m.-2:30 p.m. Dec. 4.

West Point Archeologist Paul Hudson will give a presentation about the artifacts found during the Warner House foundation excavation. For more details, call 703-499-3380 or visit the website at www.constitutionisland.org.