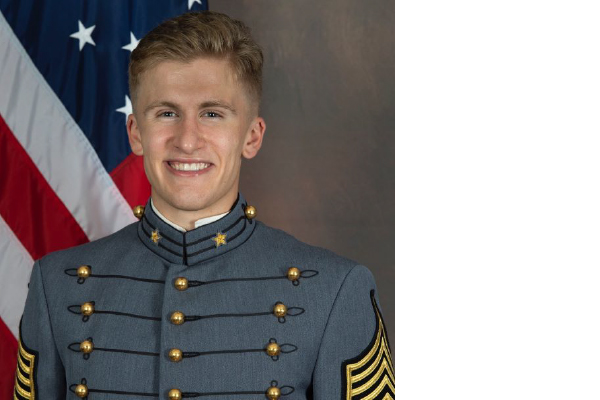 WEST POINT, N.Y. – Cadet Langdon Ogburn, Class of 2021, is one of 50 Marshall Foundation scholars selected to receive the prestigious scholarship for continued academic study following graduation and commissioning in May.

“Cadet Ogburn’s intellectual pursuits and his leadership have inspired our West Point community to deeply consider the military’s role in mass atrocity prevention. His continued study will undoubtedly serve to strengthen the efforts of our military, nation, and world for achieving security, stability, and peace,” said Brig. Gen. Cindy Jebb, Dean of the Academic Board. “His achievements and this prestigious recognition attest to the strength of his work ethic, intellect, and empathy, and we are very excited for his future contributions as a leader of character.”

Born and raised in Raleigh, N.C., Ogburn is a philosophy major with a minor in Africa regional studies at the U. S. Military Academy.

As a Marshall Scholar, Ogburn will pursue a Master of Arts in Conflict, Development, and Security at King's College in London, followed by a Master of Science in Conflict Prevention and Peacebuilding from Durham University.

The Marshall Scholar program is a postgraduate opportunity funded by the British government for intellectually distinguished young Americans to study abroad at a university in the United Kingdom, in any field of study. The goal of the program is to strengthen the relationship between the two countries for the good of mankind.

To learn more about the Marshall Foundation, visit www.marshallscholarship.org.

The U. S. Military Academy at West Point is a four-year, co-educational, federal, liberal arts college located 50 miles north of New York City. It was founded in 1802 as America's first college of engineering and continues today as the world’s premier leader-development institution, consistently ranked among top colleges in the country. Its mission remains constant—to educate, train, and inspire the Corps of Cadets so that each graduate is a commissioned leader of character committed to the values of Duty, Honor, Country and prepared for a career of professional excellence and service to the nation as an officer in the U. S. Army. For more information, go to www.westpoint.edu.