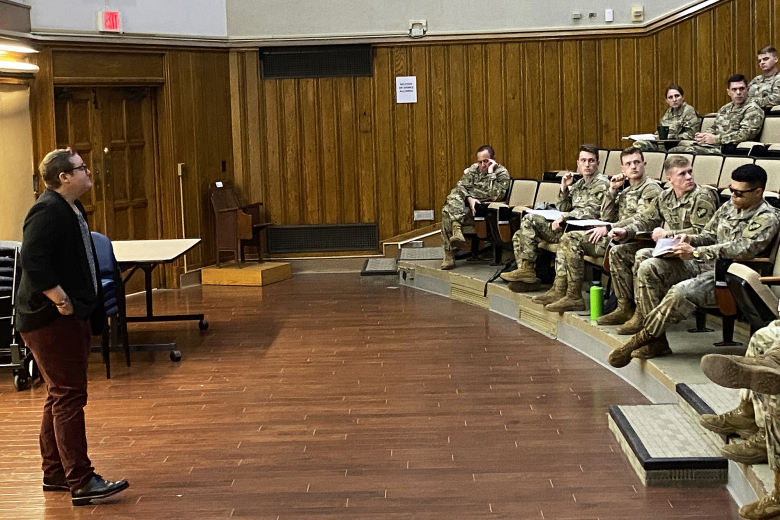 Eager hands were raised to discuss military tactics during the Modern War Institute event as Jennifer Spindel, an assistant professor at the University of New Hampshire, challenged cadets with questions related to diplomacy and non-violent strategies during war times, among other topics, on Oct. 4 at the U.S. Military Academy.

To enhance West Point’s curriculum and provide the Army and the Nation with solutions to military issues, the MWI program strives to innovate through research, education and integration in order to provide cutting-edge insight into the profession of arms.

“I wanted to get them thinking about the importance of the reputation of the United States as a good ally and to think about what it means to be a good ally and how that might even trickle down to their lives when they commission and become the face of the U.S. military,ˮ Spindel said.

Spindel’s discussion also addressed what it means to have good relationships with allied partners, whether it involves foreign military officers cadets will work with in the future or the image they will present when they’re overseas or working with foreign partners.

“I’ve known about Dr. Spindel and her work for a while and thought she would be such a great person to come and talk to (cadets) because her research covers a wide range of topics that are relevant to the Army,ˮ said Dr. Max Margulies, a research director at MWI. “It’s really good, rigorous research as well and she’s very good at communicating it.ˮ

During Spindel’s lecture, cadets discussed the U.S. relationship with Taiwan, Turkey and South Korea and asked Spindel questions to broaden their outlook on optimal, non-violent solutions.

In addition, the questions and answers segment allowed cadets and Spindel to see and understand diplomacy from a new perspective as they spoke about the conflict in the Ukraine, and addressed the impractical use of military force as the primary answer to war strategy.

“The cadets were fantastic,ˮ Spindel said. “When I finished the formal presentation piece, they showed that they were not only paying attention, but we’re actually thinking about what this might mean for future U.S. foreign policy.ˮ

Cadets also asked questions related to the United States and soft power, which refers to the ability to accomplish a mission without resorting to military strength.

Soft power can also involve influencing others through media and entertainment and following the policies and procedures of every country when broadcasting U.S. programming globally.

“One of the cadets brought up the fact that the United States movie industry in Hollywood actually changes the content of movies to be able to sell them in China,ˮ Spindel said. “Some of them brought up examples that were far and beyond what I had been aware of. Even in movies as big as the Avengers films, which were changed because Hollywood knew unless you make this change, you won’t be able to show them the movie in China.ˮ

Although the lecture was intended to teach cadets majoring in International Relations and Strategic Studies, cadets from other disciplinary backgrounds participated due to the topic’s significance.

Margulies and the rest of the team at MWI were thrilled at how many cadets attended and how they responded to Spindel’s lecture.

“Part of our broader teaching philosophy is encouraging cadets to be confident in their critical-thinking abilities and to inspire them to have a longer-term love of learning of International Relations and Strategic Studies,ˮ Margulies said.

After the event concluded, Spindel believed the experience enhanced her abilities as a communicator and educator. She also hopes the cadets are left with the thought that military power is vital in international affairs, but sometimes not using it or using it in different ways than one had initially thought can be just as effective.

“The cadets are an extraordinary group of people. Not only are they physically active, but they’re very intellectually active,ˮ Spindel said. “And so, it was a real, scholarly discussion that we had, and they did a fantastic job, taking these big, abstract political science concepts and understanding how they matter in the real world.ˮ