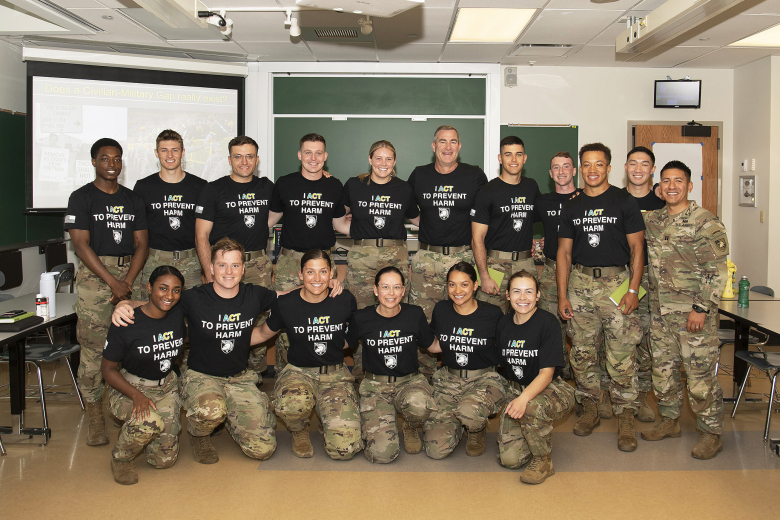 This academic year at West Point has provided cadets with a deeper appreciation for civil-military relations, and select first-class cadets at the U.S. Military Academy received a special opportunity to engage with the Dean of the Academic Board, Brig. Gen. Shane R. Reeves, in late September.

To continue the Dean’s theme for the year “Called to Serve: Military Leadership in a Democratic Republic,” a section of cadets enrolled in MX400: Officership gladly welcomed his thoughts on the current state of civil-military relations and the requirement to build trust between the institution and American society.

In MX400, cadets are empowered to understand and embrace their emerging identities as Army officers. Specifically, through a curriculum designed to have cadets internalize their future identity, MX400 seeks to enable cadets to describe the Army officer’s role in managing the unique relationships between the military and the American public.

The officer’s commission and the requirement to take an oath stem from the military’s subordinate relationship to civilian authority, what some call the “vertical relationship.”

However, military officers are required to navigate in an equally complex second dimension, the “horizontal relationship” between the military and civilian society.

Understanding the officer’s role in both concepts is paramount to one’s ability to navigate through the complexities of the contemporary environment graduates will find themselves in shortly after their commissioning.

Regarding the lesson, Class of 2023 Cadet Sammy Whipple, who will be commissioning in May, said, “When cadets learn and discuss why a trustful civil-military relationship is important, it solidifies an already deep, intrinsic motivation to serve and lead honorably. We sign up to be subordinate to those who we protect, which reflects the ultimate ideal of liberty that the Constitution was built upon. The Constitution that we all swore to defend and lay down our lives for.”

Throughout the course, cadets understand how the Army is a profession that provides a unique and vital service to society. To properly serve the American people as their clients, officers must be entrusted by society and their civil authorities to ethically employ our military expertise.

Officers are most effective when granted the autonomy and discretion to create and apply abstract knowledge, certify their own members in character, competence and commitment, and ethically apply the use of force when authorized by civil authorities.

In many ways, this special trust and confidence serves as the lubricant of the Army profession and is only possible through a healthy civil-military relationship.

Cadets learn that it is never too early to recognize the importance of this relationship.

Reeves emphasis on increasing both cadet and faculty awareness of the themes of civil-military relations has deepened the discussions inside of classrooms this semester, and it will serve as a harbinger for awareness of the requirement of the topic as the course continues to prepare cadets to transition to internalize their identity as members of the Army profession.

Practically for cadets, Reeves reminded them that by becoming members of the Army profession, they represent more than just themselves … they are accountable agents to the American public.