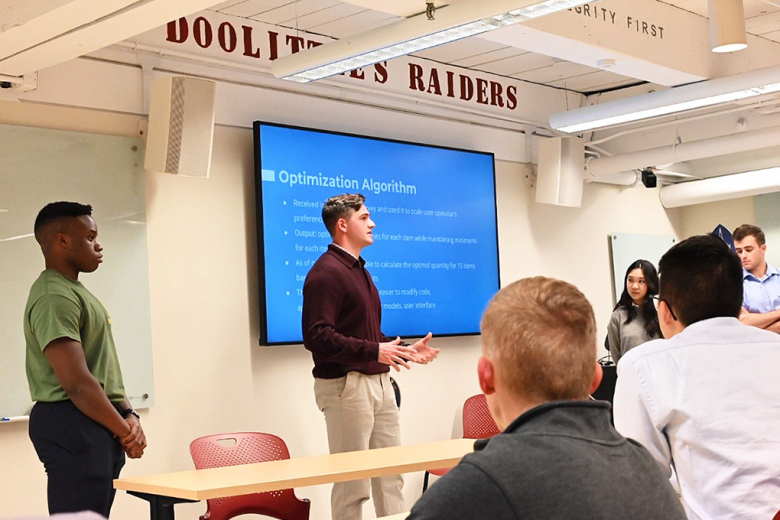 Class of 2024 Cadet Andrew Barlow briefs his team’s concern for optimizing resources in real time to Soldiers from SOCOM customer units during an in-stride check-in brief in the ROTC facility at MIT. (Photos by Lt. Col. James Bluman and a MIT Lincoln Lab Researcher) 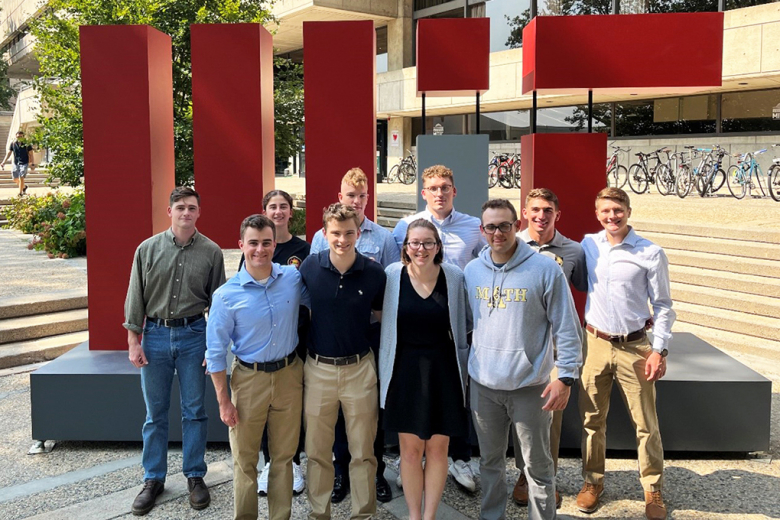 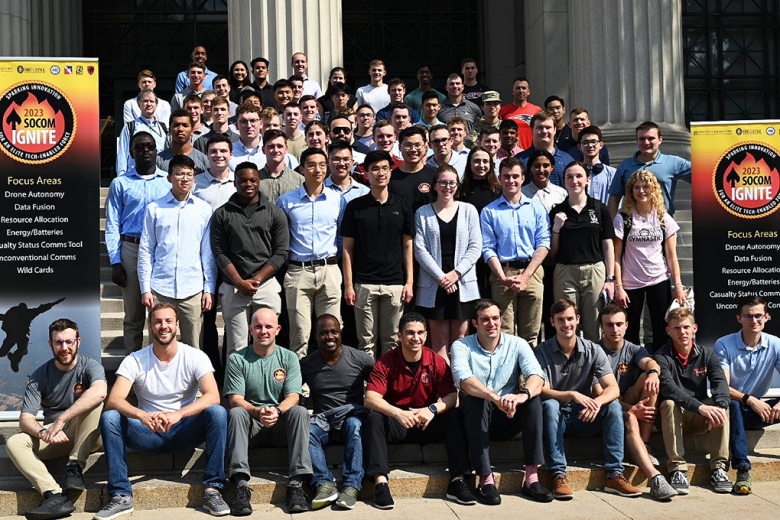 The 2023 SOCOM Ignite Kickoff Event brought together over 70 collaborators from around the country including West Point cadets and ROTC cadets from MIT, Harvard, Texas Tech, Notre Dame and several other schools along with officers in the 75th Innovation Command and technical experts from MIT Lincoln Lab. (Photos by Lt. Col. James Bluman and a MIT Lincoln Lab Researcher)
Previous Next
Previous
Next

Eleven cadets took their academic acumen on the road recently to the Massachusetts Institute of Technology to participate in the 2023 SOCOM Ignite Kickoff. In all, over 70 ROTC and West Point cadets worked to develop innovative solutions to SOCOM-submitted technical challenges.

At the end of just two days, the teams presented their concepts and preliminary prototypes in-person to the end users, Special Forces Soldiers and Navy SEALs, on the receiving end of their solutions.  This direct-to-customer model allows for immediate feedback and helps the most creative ideas to rapidly rise to the surface.

“The ability to, in a short time, come together with a team of other students, researchers and operators to tackle hard, real-world problems in an expedited environment is a testament to our cadets’ ingenuity and drive. It is a tremendous thing to witness,” said Lt. Col.  James Starling, who led the West Point team at this year’s event.

This two-day workshop provided cadets the opportunity to explore the intersection of their academic interests and current operational environment.

The event brought together West Point cadets and ROTC cadets from MIT, Harvard, Texas Tech, Notre Dame and several other schools along with officers in the 75th Innovation Command and technical experts from MIT Lincoln Lab.

The discussions between the various stakeholders provided a tangible linkage between the classroom and the military.

Class of 2025 Cadet Zoe Winston attended this year’s kickoff and came away impressed at how she could use her education to make a difference within one of the project teams. Her project allowed her to work with medics on a patient data transfer system.

“At first, we had no idea what to expect … but we all brought a willingness to work hard and solve complex problems,” Winston said. “If you’ve ever played a game of ‘Telephone,’ the results can be pretty hilarious. However, when we look at passing information from the Combat Medic on the ground to the crew in the MEDEVAC, then to the hospital, the Telephone Game isn’t so funny.”

Winston’s team developed the systems diagram to automate and transfer the vital information medics inscribe on a patient and digitally deliver it.

“What’s so cool about this project is that the complete vision is 10 years away or more in terms of what current technology is capable of,ˮ Winston said. “However, what we were able to do is develop a method that works within the current confines of technology, training, and equipment that can help now.”

Moreover, Winston was most impressed with the speed at which the team could move.  “We received real-time feedback from the End Users (the SOCOM medics themselves) about what would work, what they could use right away and so on. To quickly iterate on ideas and improve them in a dynamic environment, we produced a product we are all proud of after just 48 short hours,” Winston said.

While the trip highlighted cadet ingenuity, it has also served as a kickoff for yearlong research projects at West Point. Class of 2023 Cadets Eli Dabkowski and Madison McGovern attended last year’s event and continued working on the project through the rest of the past year, conducting follow on research with an Academic Individual Advanced Development this summer, and both continue with their research as part of their senior thesis. This two-year arc of deep exposure into her field is commonplace in civilian institutions, but difficult to accomplish within the 47-month experience at West Point. However, Class of 2025 Cadet Emma McGovern recognized the power of deep learning.

“I love that this opportunity has let me really dive deep into solving a problem for the military,ˮ McGovern said. “Having a research project where I can immediately bring what I’ve learned in the classroom that day for the past year plus and put it to real tangible use has been incredible.”