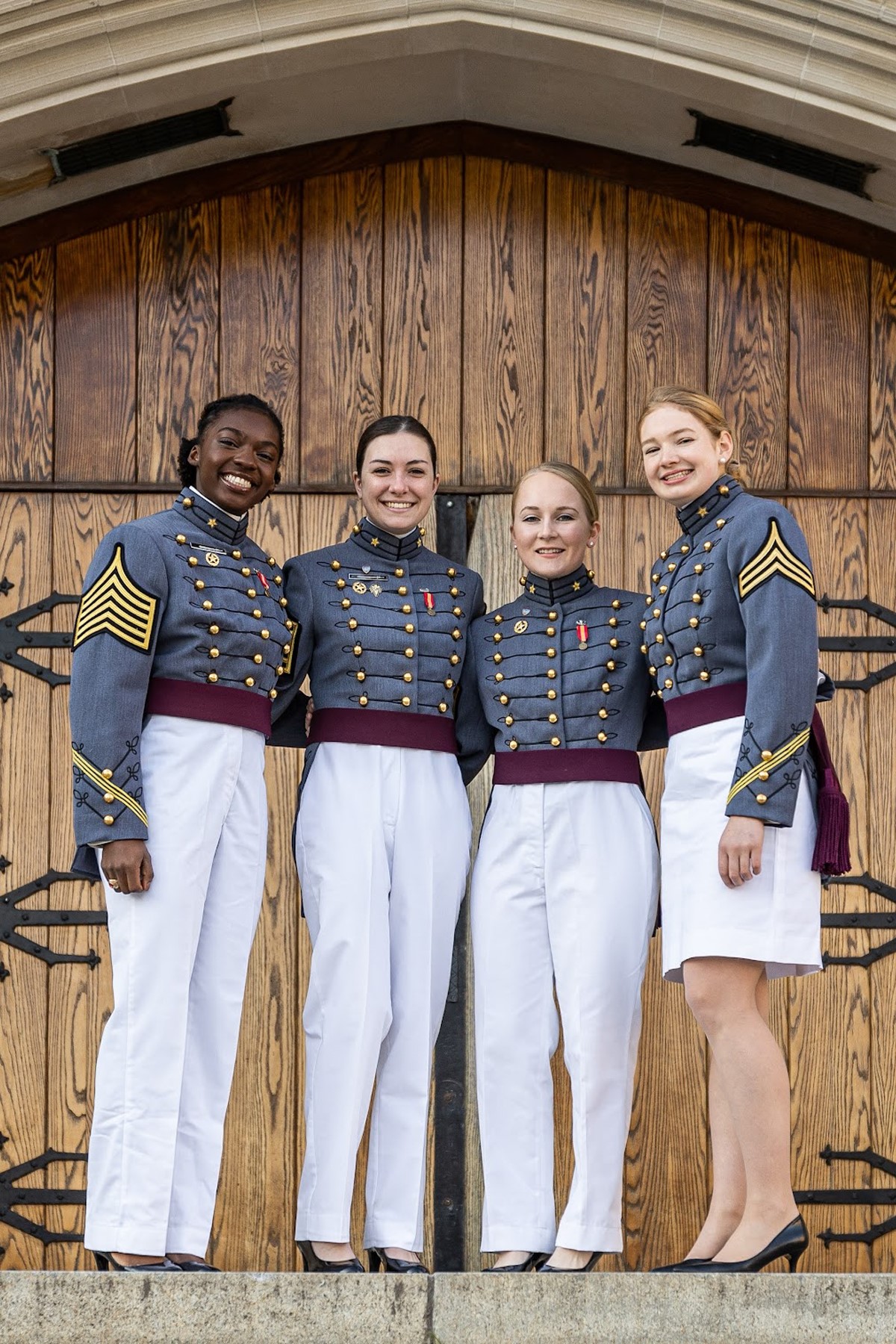 WEST POINT, N.Y. – Four U.S. Military Academy cadets were among the 32 U.S. Rhodes Scholarship awardees named Sunday. Class of 2022 cadets Hannah Blakey, Krista Flinkstrom, Veronica Lucian, and Holland Pratt will study at the University of Oxford in the fall of 2022. This is the first time in West Point’s history to have four women Rhodes Scholars awarded concurrently. The last time West Point had four American Rhodes scholars was in 1959.

“These cadets epitomize what it means to be a soldier-scholar. Their studies span numerous disciplines, illustrating the diverse intellectual capital that West Point provides for the Nation,” said Dean of the Academic Board, Brig. Gen. Shane Reeves. “We are immensely proud of all they’ve accomplished and the bright future ahead of them. Their success is a win for the whole team. As we celebrate this historic Rhodes cohort, we also celebrate the tremendous team that supported them through this process and their four years at West Point.”

Cadet Hannah Blakey, a native of Detroit, Michigan, is a Persian and French major with an interest in marginalized and at-risk communities. Dedicated to serving others, Blakey is one of three Cadets-in-Charge of the Elevation initiative mentorship club and is a preschool and kindergarten Sunday school teacher. Blakey has conducted several formal interviews and conversations with Persian-speaking refugees to better understand the cultural and economic factors that impact forced migration and refugees in Persian-speaking regions. The catalyst for this interest was a three-week cultural immersion experience in Uzbekistan in the summer 2019. She lived with an Uzbek host family and studied Persian at the Samarkand Institute of Foreign Languages. Blakey holds multiple records on West Point’s Division I track team, and she serves as the Brigade Executive Officer in the Corps of Cadets. At Oxford, Blakey plans to earn a Master of Science in Refugee and Forced Migration Studies and a Master of Science in Evidence-Based Social Intervention and Policy Evaluation. Blakey intends to branch Aviation and to use her Rhodes Scholarship experience to improve international partnerships and inform policy changes among the U.S. Army and Persian-speaking nations.

Cadet Krista Flinkstrom is an Economics major with premedical concentration and was born and raised in Stow, Massachusetts. Her academic interests lie in the nexus of global health, economics, and gender. Flinkstrom has focused on challenging herself academically and developing military proficiency on West Point’s Sandhurst Black and Gold team. She has enjoyed the opportunity to attend Airborne school and be the Golf Company executive officer at Cadet Basic Training. This past summer, Flinkstrom worked as an intern with the Development Finance Corporation in Washington D.C., where she helped design its forthcoming gender-based investment strategy. This year, she is the Academics Officer for her cadet company of 115 cadets. Flinkstrom plans to commission into the Engineering branch and to attend Sapper School. At Oxford, she will earn a Master of Science in Economics for Development and a Master of Science in Global Health and Epidemiology.

Cadet Veronica Lucian was raised in New Jersey and Delaware as the oldest of five children. The daughter of a lawyer and homemaker, she quickly learned the importance of hard work and dedication, as well as the value of leadership and compassion. A Life Science major with a minor in Nuclear Science, Lucian has done extensive materials research during her undergraduate career. Her scientific work appears in Matter. Lucian is a soloist for the West Point Glee Club and has sung for distinguished guests and public officials, including the Vice President of the United States. She is the founder of a Women’s Mentorship Group at West Point, which provides an informal avenue for women to collaborate with senior army leaders and to understand career opportunities in the U.S. Army. In June 2019, Lucian earned her Airborne wings, and she plans to commission into the Army Medical Corps. As a Rhodes Scholar, Lucian will read for a Master of Science in Materials at Oxford. After Oxford, she will serve in the U.S. Army as a joint researcher and trauma surgeon, bringing hope and healing to vulnerable populations throughout the world.

Cadet Holland Pratt currently serves as the First Captain of the Corps of Cadets. From Spokane, Washington, Pratt is a Military History major with a Middle Eastern Regional Studies minor. Inspired by her family’s suffering in the Holocaust, Holland’s research focuses on the coordination between military, civilian, and international organizations to prevent and respond to mass atrocities. Recently, she developed a Myanmar Situation Assessment for the United States’ Indo-Pacific Command region. Holland has already begun to prepare for crisis prevention as a leader in West Point’s Mass Atrocity Prevention Practicum, a simulation experience focused on humanitarian crises. Pratt intends to play a formative role in clarifying the military’s role in preventing and resolving mass atrocities by establishing a Standard Operating Procedure to clarify objectives and to identify ways and means among civilian agencies, the U.S. military, and allied forces in the international community. After West Point, she hopes to commission as an officer in the Armor Branch. As a Rhodes Scholar, Pratt will earn a Master of Science in Global Governance and Diplomacy and a Master of Science in Refugee and Forced Migration Studies from Oxford University.

Rhodes Scholars are chosen not only for their outstanding scholarly achievements, but for their character, commitment to others and to the common good, and for their potential for leadership in whatever domains their careers may lead. The Rhodes Trust, a British charity established to honor the will and bequest of Cecil J. Rhodes, provides full financial support for Rhodes Scholars to pursue a degree or degrees at the University of Oxford in the United Kingdom in partnership with the Second Century Founder, John McCall MacBain and other generous benefactors.