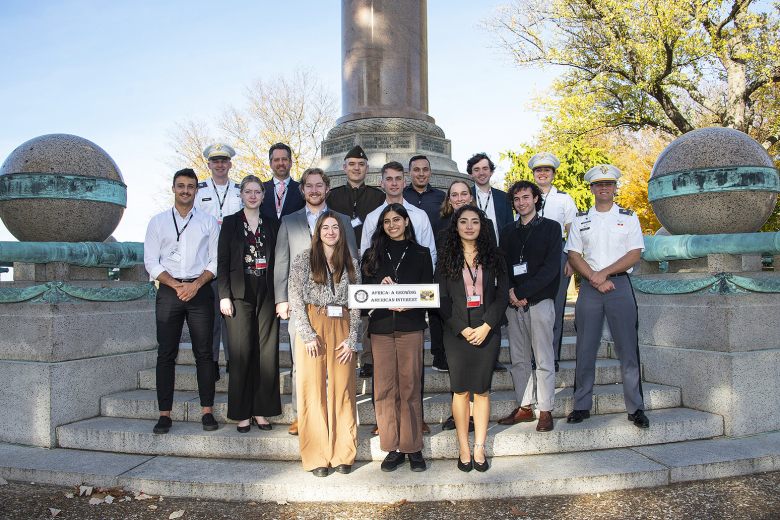 Members of the Africa/U.S. roundtable team take a group photo at Trophy Point during the walking tour of the annual Student Conference on U.S. Affairs event on Nov. 4 at the U.S. Military Academy. (Photo by Kyle Osterhoudt/USMA PAO) 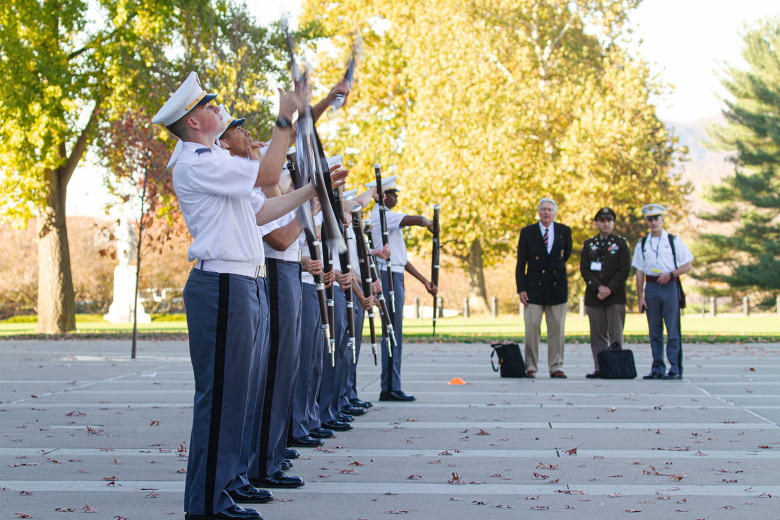 The Black Knights Drill team performs complex maneuvers with their rifles during the walking tour of the annual Student Conference on U.S. Affairs event on Nov. 4 at the U.S. Military Academy. (Photo by Jorge Garcia/PV)
Previous Next
Previous
Next

This year, cadets and students from across the Nation continue the tradition of working together to refine American policies and improve the state of affairs in the country during the annual Student Conference on U.S. Affairs (SCUSA) event from Nov. 2-5 at the U.S. Military Academy.

In 1949, West Point hosted the first SCUSA event. Since then, the academy has hosted SCUSA every fall, with approximately 200 undergraduate students from over 100 colleges and universities attending.

“One of the most important aspects of a cadet’s mission is to engage with our civilian partners,ˮ Class of 2024 Cadet Kenneth Gentry said. “I know the Dean’s theme this year has been all about civilian and military relations, and SCUSA really embodies that.ˮ

Throughout the conference, cadets and students engaged in panel discussions, received advice from subject matter experts on various policy topics and attended a keynote speaker event featuring Linda Thomas-Greenfield, the U.S. Ambassador to the United Nations.

The delegates also worked in teams through roundtable discussions to address national and international affairs and develop policy recommendations that focused on essential topics in U.S. foreign policy.

In addition, the teams were tasked with developing proposals for different policy problems that focused on multiple issues such as political economy, social media defense concerning the spread of misinformation, public health, and climate change, among others.

Roundtable sessions lasted about six hours, with each day culminating with a West Point showcase. The showcase included a walking tour through the historical monuments of West Point and a presentation from West Point clubs such as the Black Knight Drill Team, the Pipes and Drums team and the Parachute team, among others.

Juliet Welk, a junior from Scripps University, worked alongside Gentry during roundtable discussions on how the U.S. and Africa should work together.

“We debated on what the approach for the U.S. should be as a whole, keeping in mind that this is a giant continent with distinct regions and countries,ˮ Welk said. “There are many linguistic and cultural differences that you have to keep in mind and so you can’t have a blanket policy for an entire continent of 54 countries. That’s impractical.ˮ

The Africa/U.S. roundtable team created a policy idea that represented each region and addressed the current political situation of each country.

The team also studied the current U.S. relationship with each country.

From a military perspective, Gentry said he was thrilled to work jointly with his civilian counterparts and felt like this experience would elevate his leadership acumen when he commissions into the big Army.

“The biggest takeaway I got from the entire conference was just the conversations and the relationships that I and my cadet counterparts had with our civilian delegates that came,ˮ Gentry said. “From a military perspective, we’re all in that military security mindset, especially when we talk about development issues, rights of women and children, and humanitarian issues. We don't always focus on these things at West Point, so it was enlightening to hear those perspectives from outside the institution.ˮ