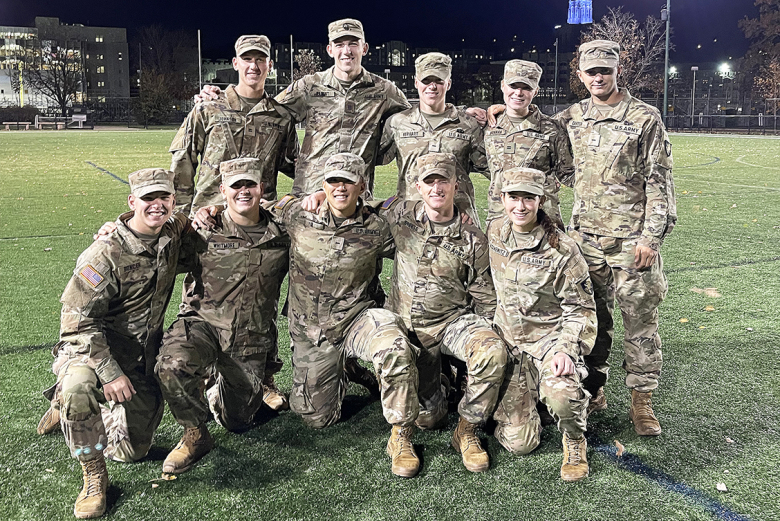 Company D-2 (top right) and nine other cadet companies, to include the Black and Gold teams, are the 12 U.S. Military Academy teams destined to compete in the annual spring Sandhurst Military Skills Competition in April, which will include Army Reserve Officers' Training Corps units from other universities, all the service academies and 16 international teams. (Photo by Sgt. 1st Class Luisito Brooks/West Point PAO NCOIC) 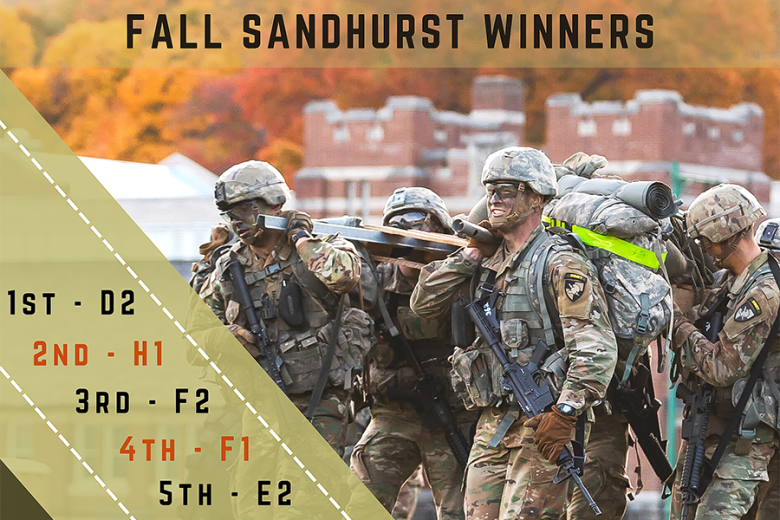 The 10 companies earned the right to compete in the spring by placing in the top 10 at the 2022 fall Sandhurst Competition Oct. 28-29. The announcement of the top teams took place in a ceremony after the fall Brigade Championships at Daly Field Monday. (Photo by Class of 2023 Cadet Tyler Williams)
Previous Next
Previous
Next

The fall Sandhurst Competition, which took place on Oct. 28-29, was meant to determine the top company teams who will move on to the official Sandhurst competition in the spring.

“These teams have been training extremely hard over the past two and a half months, and more than 400 other cadets were involved in planning and running the individual events,ˮ said Capt. Zackary Miller, the officer-in-charge of the fall competition. “It is quite a large operation that we have put a lot of time and effort into planning.ˮ

“I have been a part of many Sandhurst competitions over the years here at West Point, and this is one of the most challenging competitions I’ve experienced," Parent said, the squad leader for the Company D-2 team. “It was a good competition because it was not only physically demanding, but it also hit on many technical aspects as well.ˮ

The first part of the competition consisted of a round-robin-style series of events focusing on various military skills such as grenade throwing, weapons assembly and disassembly, first aid, call for fire and a ruck march. Other unique events included the cognitive challenge, also known as “The Apparatus.ˮ

The Apparatus is an event where competitors were given an assortment of objects and were required to assemble them into a portable device that can transport equipment across an entire field.

“Each lane required a unique level of skills from everyone on the team, so it took a great deal of teamwork to make it,ˮ Parent said. “As a matter of fact, without teamwork, it is impossible to succeed in this competition.ˮ

The competition was neck and neck through the first day and even closer toward the end of the second day.

“The spread between most team’s scores were extremely close,ˮ Miller said. “It really came down to pure physical fitness and teamwork that separated the teams that made it into the Top 10 versus everyone else.ˮ

Even though only 10 teams will go on to compete in the international competition in the spring, Miller said how proud each competitor should be for giving their all out there.

“I think the training was both fun and challenging for the competitors and also entertaining for those cadets who came out to cheer on their companies,ˮ Miller said. “I’m extremely impressed with the small group of cadets, tactical officers and noncommissioned officers who were responsible for planning and resourcing the event.ˮ

He explained that it was a lot of moving pieces and hard work to ensure the event was safe and successful.

These 10 teams will be joined by the USMA Black, Gold and Prep school teams as they move on to compete in the spring competition.

The annual Sandhurst Military Skills Competition is generally held during the last week in April. The 2023 two-day competition will feature teams from West Point, Army Reserve Officers’ Training Corps units from other universities, all service academies and 16 international teams from across the globe.

“What I want to tell the teams moving on to the spring Sandhurst Competition is don’t let off the gas now, and keep training hard to prepare yourself,ˮ Miller said. “We have company teams that will be extremely competitive, and we want to show all of these international teams, service academy teams and other ROTC programs what USMA is made of."